THE ROAD TO OVERCOMING TRAGEDY

It doesn't seem that long ago that I was making my way to Montana from California for the opportunity of a lifetime. I was on my way to go train 3 horses on a huge ranch, and completely felt like this was finally my big break for my training business. Ironically enough, it was not quite the break I had hoped for.

I had been training horses for a few years at this point, but mostly what we would consider "problem horses" meaning broke horses that had some issues that needed to be worked through. I had started a few colts in the past but this was a huge project that I really wanted to take on.

When I got to Montana, I had my area set up and I began my work. The goal was to have them broke enough to ride in 30 days. It was a faster timeline than I was used to, but I was up for the challenge.

About two weeks into the process, all 3 horses had saddles on their backs and we were continuing their desensitizing and ground manners. But one of the colts, the most calm one in my opinion already had 4 or 5 rides on him at this point. He was doing really well and I was excited for his owner to see his progress.

One day, about 2 weeks in, his owner was going to come ride him for the first time, and right before, I decided to hop on for just a few minutes. This had never been a big deal for the previous few rides, but on that day something went wrong. The horse began bucking before I could even get my butt in the saddle. I sat on him for about 30 seconds before deciding I was probably going to bail. This normally is not a huge deal for me, I have been thrown a time or two in my day, so hitting the ground didn't bother me much.

However, when I hit the ground, the horse continued to buck and spin in circles and came over the top of me, and in the midst of the chaos, he stomped right down on my leg, and broke it.

The horse that broke my leg

Adrenaline was pumping through me so I didn't feel it in that moment, and tried to get up and walk but immediately fell back down. The whole situation seems like a blur to me now, but I was so lucky to have Tyler right there as it all happened. He was able to pull me off to the side and keep the horse away.

Once I knew I was to a safe point, the adrenaline died off and I immediately could tell my leg was broken. Not to be graphic, but it felt like there was jello in my leg just flopping around (aka my bone) I know I know. Not fun.

My whole life I have been taught, when you fall, get back on again. But in this situation I couldn't. I had given riding lessons for years and always told my students, if you fall, and don't go to the hospital, you are getting back on. 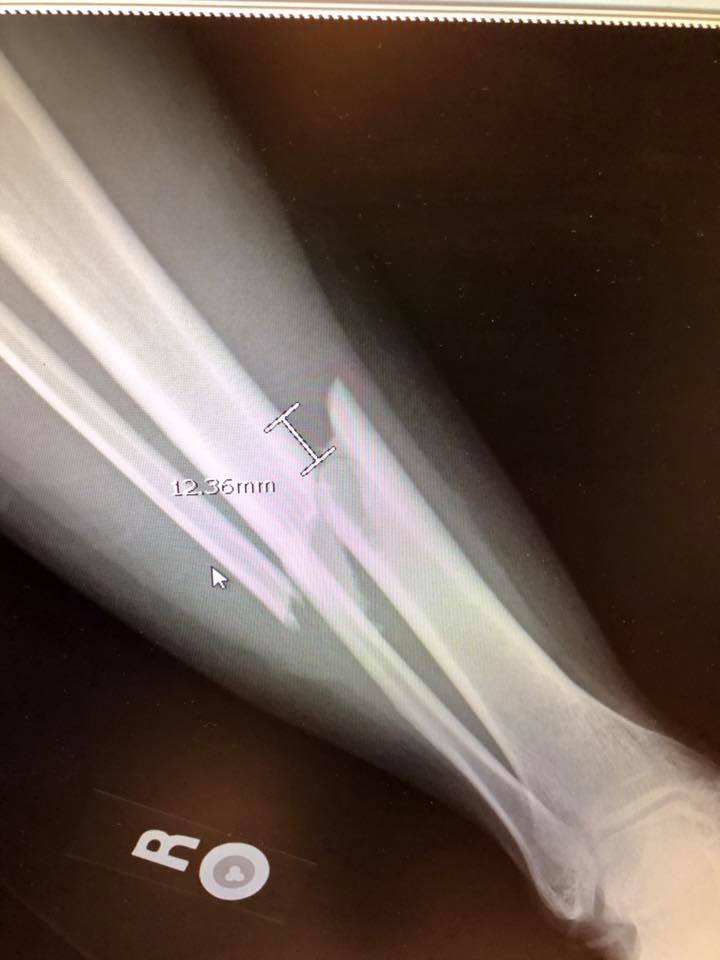 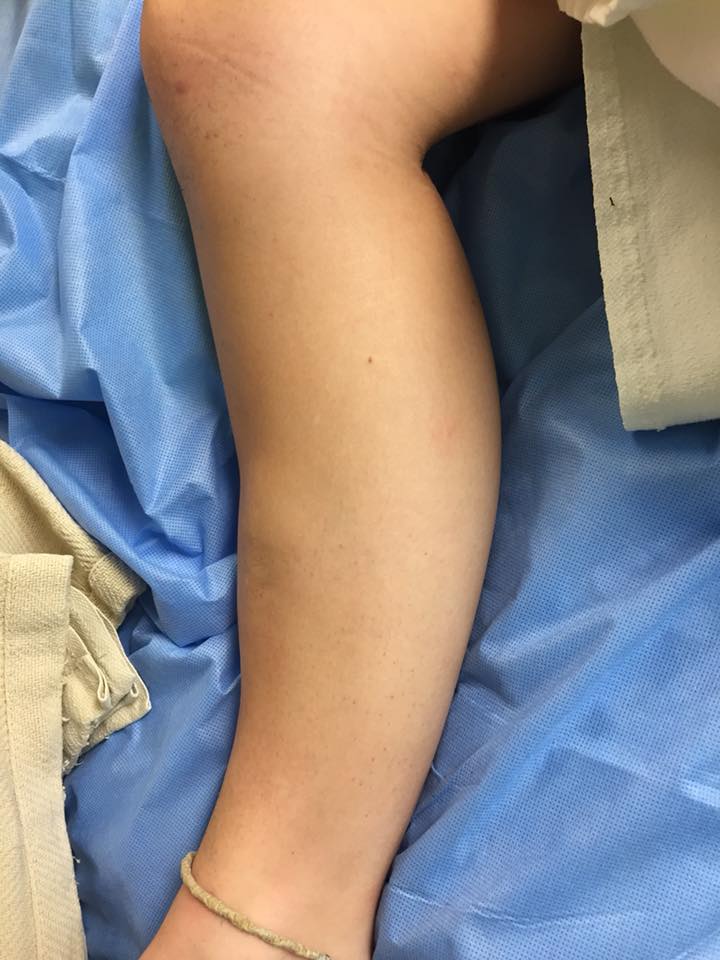 If you know anything about riding horses, then you know it's a feeling you will never get over. It's like an addiction that will never be cured. It doesn't matter how many bones break or how hurt you get, all you ever want to do is get back in the saddle.

So as I laid there in that hospital bed, all I could do is cry because I knew it would likely be months before I could start training again, and that was a huge pill to swallow. I also felt humiliated that I had failed what I came there to do. I felt like I let so many people down, and completely embarrassed myself.

Me in the hospital in Montana

I ended up going back to California for the surgery and to recover and Tyler drove me the whole way, like the stud that he is. After surgery I was told that I could technically walk, as the metal rod was now in place of my broken bone. However it wouldn't be easy and it would hurt for a while so I would need to use crutches.

I've been on crutches before, and I have dealt with my fair share of hospitals, but never in my life had I gone through such a traumatic experience like that, with such permanent consequences. Luckily for me, it was nothing that was too permanent that would keep me from riding again. Just a matter of weeks.

I was itching to get back in the saddle every single day. It was killing me not being able to ride my beloved horses. But after some time went by, and even though I was not all the way healed, I knew I had to get back out there. So I had Tyler help saddle up my horse and my mom came to supervise and make sure I was being smart...LOL probs a good idea

But something was different. It didn't feel the same. I was nervous. Nervous to get on my own horse that I had ridden 1000 times before. The horse I knew would take care of me and never do anything to hurt me. I was scared to get on his back, even though I wanted to more than anything. That day ended up just being a little pony ride, as I was still in no condition to do much on my own, but I was devastated and beyond frustrated with myself.

Once I was completely healed, I told myself I was going to ride every day until I got my confidence back. Riding my own horses was something I was perfectly content doing on my own without anyone around, but suddenly I always wanted someone out there with me supervising just in case.

I would have little mini heart attacks any time my horses would flinch a muscle, and I felt hyper aware of every tiny thing they did. Stuff I normally would not have ever blinked over.

It took me a solid year of pushing myself to finally get to a place where I felt confident again and didn't over think every time I would ride. But even still, almost 2 years later, I am not 100% the way I used to be, I don't know if I ever will be.

That was a really hard truth me for to take on, as I had wanted to continue to train horses and push forward. But I decided I needed to take a break from that business and do a little soul searching again to really figure out what I wanted to do. And after a lot of reflection, I figured something out.

2018, the year I broke my leg, was the year God knew he needed to humble me. I was at a point where I felt like I was on top of the world, and maybe a little cocky. Breaking my leg, doing the thing I love the most in this world was a reality check, but also a testament that no matter what happens, I will never give up on horses. My horses are my whole entire world and there is no way I could ever imagine life without riding. It gave me perspective as to why I started riding horses in the first place.

One of my first rides after the accident

I think about people who have been through other types of tragedy a lot. The ones who have been in car accidents, or lost love ones in horrific ways. I think about how they must feel the same way I did. How hard it must be to keep pushing forward to get back to a place that feels normal. Or at least as close to normal as possible.

My advice to anyone who is struggling through something right now, no matter what it is, is to not be so hard on yourself. Don't put yourself on any sort of timeline or process you feel you need to follow. Go on your own journey to recovery whether it be physically or mentally. You are not a failure just because you failed. You are a winner if you fail, allow yourself to accept it, and then pick up the pieces and keep going.

The road to overcoming tragedy looks different for everyone but in the end we are really all in this together.

I am so thankful for the community I have built and the friends + relationships I have made since my accident. I am stronger and more independent than ever before and I know that even when it's hard to understand sometimes, God has a plan. It's his world. I'm just living in it.

10 HABITS THAT MAKE YOU MORE SUCCESSFUL

3 KEY WAYS TO GO FULL TIME IN YOUR BUSINESS

I'm a western wedding photographer, an online marketing expert, and I have a huge passion for teaching small town girls how to live up to their fullest potential!

HECK YEAH, I GOT THE BEST FREEBIES FOR YOU BABE!

FOR BRIDES: The ultimate guide to creating a flawless wedding day timeline! Includes tips, tricks, and an example template!

how to capture authentic moments

FOR PHOTOGRAPHERS: Never get stuck during a photo session again! This guide will teach you how to create real connections with your couples and capture those in between moments we all love so much!

FOR EVERYONE: My top 5 favorite apps I use to make my instagram feed cohesive, my stories stand out and to schedule out all my posts!